Today is World Sepsis Day. World Sepsis Day, developed by Global Sepsis Alliance, is a collaborative effort of organizations and individuals. Each year on September 13, supporters around the globe organize events to raise awareness for sepsis. World Sepsis Day is part of Sepsis Awareness Month which takes place the entire month of September. This non-profit movement is working to stop sepsis and save lives.

Their goal is to reduce sepsis cases 20% by 2020. Increasing publics and professional awareness and providing education and resources are two ways they are trying to make this happen. They also accept donations to support these efforts.

What is Sepsis?
Sepsis is one of the most common, yet least recognized diseases. It is a complication caused by the body’s overwhelming and life-threatening response to infection. It can lead to tissue damage, organ failure, and death. Sepsis is difficult to diagnose; it happens quickly and can be confused with other conditions early on. Sepsis is a medical emergency and time is critical. When sepsis is quickly recognized and treated, lives are saved. It remains the primary cause of death from infection, greatly stressing the importance of infection prevention. What most people don't realize is sepsis is very common and carries a high risk of death and long-term complications. Knowing the signs and symptoms of sepsis leads to prevention and early recognition, which saves lives.

Centers for Disease Control and Prevention recently released a report about sepsis which you can view here.

Here at Primaris, we work to make a difference. We partner with hospitals to do their core measures sepsis abstraction and surving sepsis campaign so they can implement performance improvement programs to: 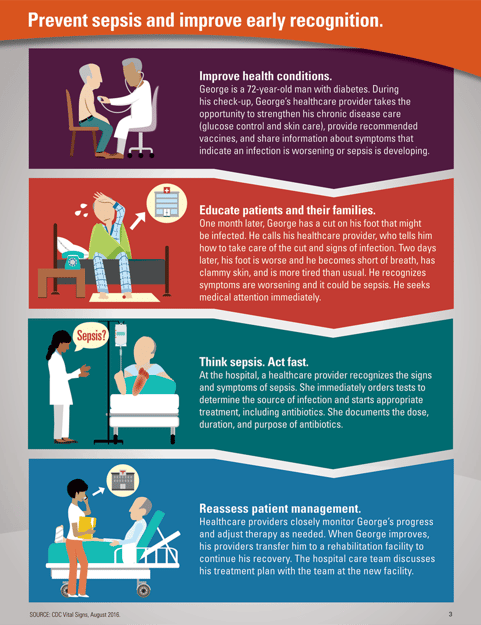 Next Steps for 2016 PQRS Reporting

The Connection between Healthcare Quality and Operational Efficiency