What does cricket farming have to do with Primaris or the Quality Talk podcast? This isn’t exactly a nuts-and-bolts episode about healthcare quality improvement and how to make the best use of healthcare data. But the Quality Talk/cricket connection really isn’t much of a stretch.

Quality Talk has examined the subject of social determinants of health – which includes food and nutrition – several times, and the Primaris vision is “Effective healthcare solutions to enrich quality of life.” That’s pretty heady stuff. And without access to healthy, sustainable food supplies, well, life wouldn’t have much quality, right?

“We call crickets the gateway bug. It’s approachable. Not too many people are horribly scared of crickets.”

Besides, edible crickets is just a fun topic. And if we can have some fun while we learn and think, isn’t that a win for us all? Episode 64 also features a new Quality Talk voice, Allison Schwent, Primaris's director of finance. Allison was among Primaris staff that “chowed down on some samples” at our January staff meeting. She’s co-hosting this episode with Jodie Jackson Jr.

“I’ve been so fascinated with today’s topic,” Allison eagerly says. “So many questions …”

Meet James Rolin and Cowboy Cricket Farms
1:04 – The Rolin farm is in Belgrade, in southwest Montana. “Mountains everywhere … We’re just kind of in a snow globe surrounded with mountains," he says.

Kathy (CEO) and James (COO) met while in the US Coast Guard. After more than a decade of marriage, three kids, a couple businesses, and a life changing bankruptcy they found themselves in their “forever home”: Bozeman, Montana. Read their story here.

Cricket farming isn’t a novel concept. It’s a serious vocation and an industry that is getting off the ground.

“Its agriculture, it’s farming, and it is definitely a serious vocation,” James says. The business has eight partner farmers. “It is an industry that is growing very rapidly.” He expects to have 50 to 60 cricket farmers on board before the end of 2019.

James Rolin, COO of Cowboy Cricket Farms, answers questions about cricket farming and 'The Ewww Factor' in this YouTube video. (That CCF logo. Perfect, isn't it?)

“We’re all helping to take care of people. Nutrition is the foundation for good health,” James says. “Not only that, but we need to have a clean environment, too.” Crickets can help provide a better diet, using fewer resources. “If people eat really well, they don’t need as much medical assistance.”

The Bug Buffet.
When James’s wife, Kathy, returned from the Bug Buffet, an annual event hosted by Montana State University, she pitched the idea of cricket farming. His reaction: “I thought she was crazy.”

But the idea already had ample motivation waiting to surge. “We’ve had our own food insecurities,” he says. “We’ve had to have food given to us by food pantries and friends and family … “that’s something that affected us.” He adds, “With this company, we’re creating ways to feed more people. So that every day, we can get just a little bit less hunger out there in the world.”

The most recent Bug Buffet featured an off-campus tour of Cowboy Cricket Farms.

6:50 – The Rolins have a son and two daughters, each with a different taste – or, no taste – for crickets. But their youngest loves the whole roasted crickets. “It’s one of his favorite snacks. He’ll wipe out inventories.” (Primaris staff also snacked on whole roasted jumpers.) One daughter has “a moral issue against eating crickets.” 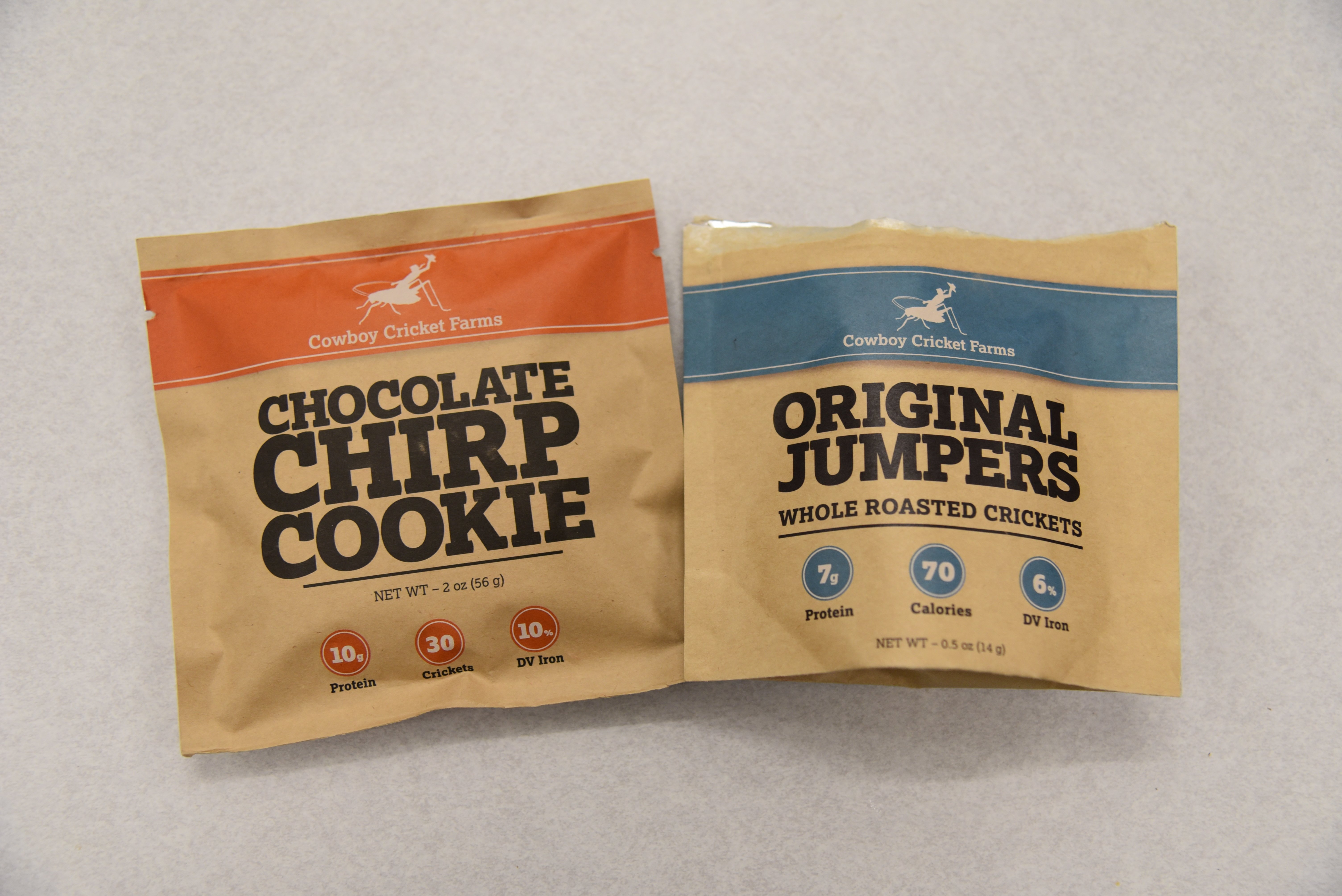 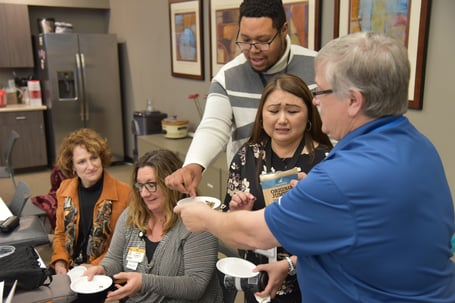 But Allison wants to know if the family makes crickets a regular part of meals.

“We eat them mostly as a snack and to add a little extra nutrition … I prefer them as more garnishment or snack,” James says.

Jodie’s take on the company taste-test: “I think the overwhelming agreement was that the roasted ones tasted like corn nuts. Sort of a heavier popcorn. All of us were really surprised, pleasantly so.”

“Most people use the cricket powder to substitute” for some of the flour, which will increase iron, protein, and lipid intake.

10:44: “We’ve had a lot of people try the cookies and not read the sign next to it. ‘Wow, this is a great cookie. What’s so special?’ Then that’s a good conversation.”

James is used to the predictable eye rolls when some insect-wary crowds or individuals hear about his enterprise. But insects as food is only “a new thing” in Western culture. He says 80 percent of the cultures around the world eat insects. “We’ve been changing how people relate to their food."

15:33 – Cowboy Cricket Farms was the $25,000 winner of the Greater Philadelphia Veterans Network Shark Tank competition in December 2018. The business also won a cash award at the Patriot Boot Camp in Denver. (Read "James and Kathy Rolin are on a mission to get you to eat bugs" here.)

The “why” of cricket farming goes beyond food and nutrition. The environmental impact, compared to cattle farming, is “pretty immense.”

“Everyone knows Montana is a cow state,” he says. There are three million cattle and one million people. “So we like to talk about cattle when we talk about crickets.”

Pound-for-pound, compared to beef, cricket farming uses 2,060 times less water, 14 times less feed, and produces 80 times less methane, using less than 1 percent of the comparative land mass. And crickets are more nutrient dense. Twice as much protein and iron, and 45 times as much Omega 3 fatty acid. “It’s an exceptionally nutritious food source that has very little impact on the environment.”

18:28 – “The pricing hasn’t been very volatile, but it has trended upward. There’s more demand, but the supply hasn’t shifted very much.” A pound of cricket powder can help make 16 dozen cookies. Long-term, the price shouldn’t be $54.

“Our goal in next three years is to have a product line that retails for $20 a pound or less, which means wholesale cost will have to be even less.”

“Have an open mind about food. Just because something’s different doesn’t mean it’s bad. And if you try it, you just might like it.” - James Rolin

Just remember cricket powder isn’t true flour. There’s no gluten, so it needs an emulsifier or other binding agent. “You have to use it with flour if you want to use it as a baked good.” It is possible to add a binding agent in order to make a 100 percent cricket powder pancake, but … “You would be eating an enormous amount of cricket powder … several days of protein.” (Read Why eat crickets?)

22:38 – The “disgust factor” is very common. But not so long ago, sushi – raw fish – was not popular at all in the U.S. The same was true for almond and soy products. “Only weird health nuts would eat that stuff,” James says jokingly. “We can educate people and let them know this isn’t just a good thing – it’s a normal thing to do. People have evolved eating insects.”

The nuts and bolts of cricket farming.
25:16 – “There are no survivors. They all become food.” James explains how the crickets are “harvested” and that dead crickets and cricket waste is packaged and sold as frass, a plant food. “Our demand is so high that we are generally several hundred pounds behind at any point.”

Crickets are “harvested” by freezing. About 3,000 dehydrated crickets (they lose about three-fourths of their weight when dehydrated) is the equivalent of one pound of powder.

The realm of health and safety regulations is also developing.

“It has been an adventure trying to answer that question … There are no regulations in the U.S. In fact, there are very few anywhere in the world,” he says. The farm complies with Food and Drug Administration guidelines for poultry, because those are the highest standards. All plans and products are FDA-approved, and a registered dietician also advises on safety and nutrition. (From the CCF blog: The chirp on cricket farms.) 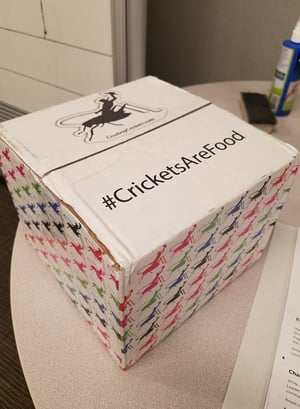 Another advantage of cricket farming: “It’s good business sense. You can grow them indoors, year-round, no matter the climate,” using an existing building that doesn’t need to be purpose-built. Currently, farms range from 400 square feet to 7,000 square feet.

31:64 - “You don’t need a giant footprint,” James explains. Partner farms just started in April 2018 and a few are at capacity. “We have a couple year waiting list on our base products.”

Life cycle and harvest.
It takes about 11 days for the eggs to hatch, which requires a steady 70 to 90 percent humidity and 94 degree environment. The crickets reach adulthood at six weeks. Males chirp, females find them, and they mate. The whole process starts again. Females can lay about 14 eggs per day.

“You can grow the population of crickets on your farm very, very quickly,” he says.

There are over 900 species of crickets. “It’s not a matter of can you eat them, it’s ‘is it commercially practical?’” James explains. Cowboy Cricket Farms raises Acheta Domesticus, which is one of two cricket species that the FDA allows transported across state lines. He mentions the Giant Weta – a scary-looking, 5-inch cricket that can munch on a carrot – but he’s not aware of anyone eating those insects. (Watch a YouTube video of a carrot-munching Giant Weta here.)

Why crickets and not grasshoppers … or tarantulas?
36:36 - “We call crickets the gateway bug. It’s approachable. Not too many people are horribly scared of crickets,” James says, drawing laughter from co-hosts Allison and Jodie. “You try to feed someone a cockroach or a tarantula – which are also very common forms of food in other parts of the world - and you’re going to have lots of problems. But crickets, the idea is more approachable. It’s not a worm, not a larvae … People aren’t horribly afraid of them, generally.”

How time- and labor-intensive is cricket farming?

“It’s still agriculture. At the end of the day, good animal husbandry … is very, very important. As a living animal, they need to be taken care of everyday. A lot of it they can take care of themselves.” James says the farm is working to develop an automated system to do some of the work, such as feeding and watering. “We don’t want to get rid of farmers at all. We just want to make their lives easier. The people are more important than the machines.”

Separating living crickets from the dearly departed.
41:00 - “Crickets basically take care of the separating themselves.” When it’s time to harvest, the farmer shakes off all the egg cartons that the crickets have climbed to hide. The frass – waste and dead crickets - remains on the floor or tray and is easy to collect.

Cowboy Cricket Farms is looking for more people to be an ambassador for the farm. One such ambassador – James calls them “Superhumans” – is Mike Ergo, a Marine Corps veteran and triathlete. (Mike Ergo was featured in People magazine. Read the story here.)

“Please help to support veteran businesses,” James says to wrap up the conversation. “Have an open mind about food. Just because something’s different doesn’t mean it’s bad. And if you try it, you just might like it.” 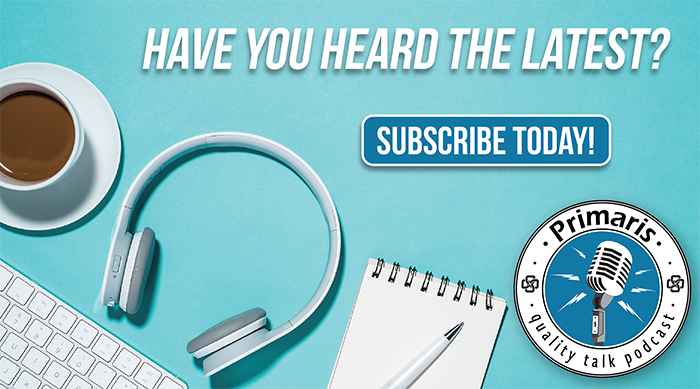 Are You Leaving Money on the Table?  Primaris CEO Talks Registries, Bundles